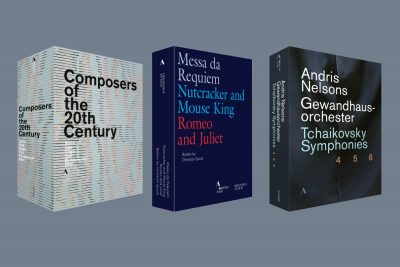 The ballet box set (DVD & Blu-ray) combines the wonderful ballet choreographies by Christian Spuck that premiered at the Opernhaus Zürich and were released between 2017 and 2020 on Accentus Music. Spuck’s choreographies, brought to life on stage by the excellent dancers of the Ballett Zürich, unite beauty, opulent costumes and stages, unique stories, manifold emotions and genuine expression to create one-of-a-kind worlds and tales of dance.

The festive series of concerts to celebrate the inauguration of Andris Nelsons as the 21st Gewandhauskapellmeister and the 275th anniversary of the Gewandhausorchester saw the beginning of a new Tchaikovsky at the Leipzig Gewandhaus. This box set (D& Blu-ray) combines the so-called „Great Symphonies“, Numbers 4 to 6, recorded in 2018 and 2019 and separately released in 2019 and 2020, in one box set. It also includes Shostakovich’s Violin Concerto No. 1 with soloist Baiba Skride, Weinberg’s Trumpet Concerto with soloist Hakan Hardenberger, and Mozart’s Symphony No. 40

You can find the DVDs and Blu-rays that are in all those box sets on our webseite.
The box sets will be available worldwide from mid-November. Look out for the purchase links below the images once they are available!