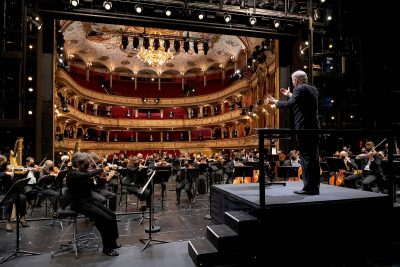 The “German Requiem” made Johannes Brahms one of the most famous composers of his time. He himself later said of his work, “I have now found consolation.” Central to the texts, which Brahms took from the Old and New Testaments of the Bible, is precisely this motif of consolation. Perhaps that is why, especially in times of the ongoing pandemic with all its restrictions on art and culture, it is also a work of great symbolic character.

Under the direction of Gianandrea Noseda, who presented himself with this extraordinary concert as the new General Music Director of the Zurich Opera House, the choir and orchestra performed in an empty hall – the orchestra on the stage, the choir facing it in the parquet and the tiers of the auditorium. Distanced, yet united in consolation. “Blessed are those who mourn, for they shall be comforted.”

A production of Accentus Music in co-production with Arte G.E.I.E., SRF, SSR SRG, in cooperation with  Opernhaus Zürich.