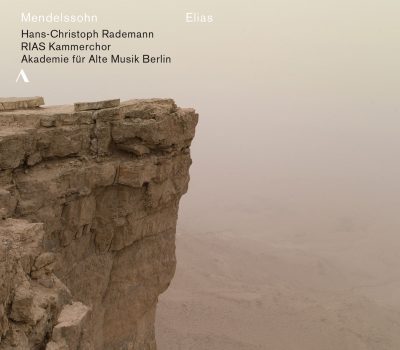 “Never was there a more complete triumph – never a more thorough and speedy recognition of a great work of art.” This was the response of the critic in the London Times to the wildly successful premiere of Felix Mendelssohn’s Elias in 1846. Hans-Christoph Rademann began his tenure as Principal Conductor of the RIAS Chamber Choir with this groundbreaking oratorio. After eight productive and successful years, his final concert in July 2015 also featured the work. It was a “Farewell Performance with Furor” (Der Tagesspiegel), not least because of the impressive performers involved: the RIAS Chamber Choir, the Akademie für Alte Musik Berlin, and the soloists Marlis Petersen, Lioba Braun, Maximilian Schmitt, and Thomas Oliemans.

Hans-Christoph Rademann is one of the world’s most sought-after choral conductors, a specialist in the sound of choral ensembles. From 2007 to 2015, he expanded the reputation and repertoire of the RIAS Chamber Choir, helping the group to achieve a remarkable spiritual and emotional identification with the subject matter of the works it performed. Rademann has said, “I want us to not only be involved with perfect singing, but to embody a certain attitude and convey a message that will touch listeners all over the world.”

“The recording itself is excellent, full and forward, yet with a nice sense of depth and spaciousness.”   Audiophile Audition

“… for a stylish and full-blooded Elias, there is much to recommend Rademann.”   Gramophone