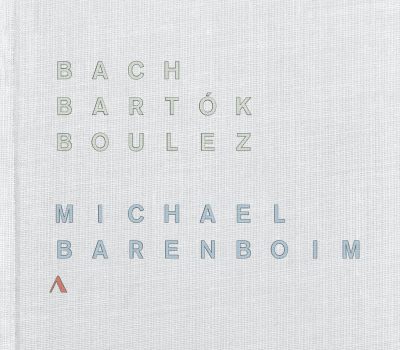 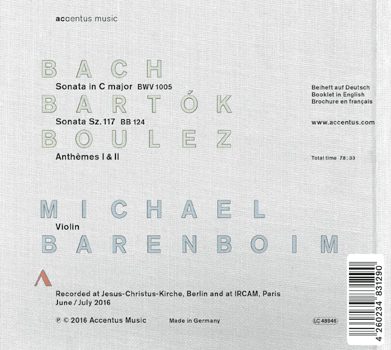 Michael Barenboim’s first solo CD, conceived like a solo recital, comprises the works of three composers that have had a profound impact on his musical upbringing. At first glance, these works could not appear more different, but together they create an unexpected yet all the more exceptional listening experience.

J. S. Bach’s Sonata for solo violin No. 3 demands the most artistic and finest technical skills of a violinist, yet its ever present melody and musical simplicity create an unmatched beauty. Béla Bartók’s Sonata Sz.117 was clearly inspired by Bach’s works for solo violin. Bartók demands just as much if not more of the violinist and carried Bach’s ideas into the music of the 20th century to create a work full of contrasts but with a unique and poetic aura. In his Anthèmes, Pierre Boulez explores the boundaries of a violin’s playability. The abstractness of Anthèmes 1 is surpassed in Anthèmes 2 where Boulez adds live electronic elements to the piece, which he helped to develop at the Ircam studios in Paris. These two pieces create an entirely new world of sound that serves as the musical parenthesis of this exceptional recording.

“Barenboim makes it all sound easy, though, with performances spilling over with life and drama. Every work’s soul has been ignited and revealed, every second telling a story”  Gramophone