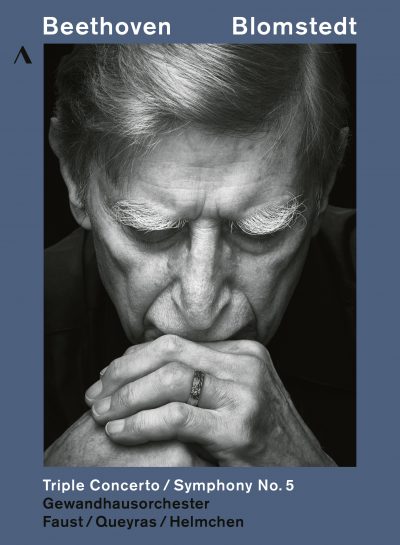 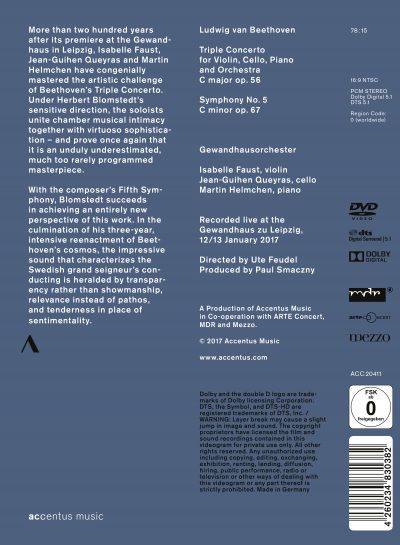 With this release, Accentus Music completes its Beethoven DVD trilogy with Herbert Blomstedt and the Gewandhausorchester Leipzig

More than 200 years after its premiere at the Gewandhaus in Leipzig, Isabelle Faust, Jean-Guihen Queyras and Martin Helmchen have congenially mastered the artistic challenge of Beethoven’s gemstone. Under Herbert Blomstedt’s sensitive direction, the soloists unite chamber musical intimacy together with virtuoso sophistication – and prove once again that the Triple Concerto is an unduly underestimated, much too rarely programmed masterpiece.

With the composer’s 5th Symphony, Blomstedt succeeds in achieving an entirely new perspective of this work. In the culmination of his three-year, intensive reenactment of Beethoven’s cosmos, the impressive sound that characterizes the Swedish grand seigneur’s conducting is heralded by transparency rather than showmanship, relevance instead of pathos, and tenderness in place of sentimentality.

This release marks the completion of the DVD/Blu-ray trilogy that started with Beethoven’s Ninth, Sixth and Seventh Symphonies. It also leads the way to the release of all Beethoven Symphonies in June, recorded between 2014 and 2017 at the Gewandhaus zu Leipzig – just in time for the maestro’s 90th birthday in July of this year.

“Anyone who thinks seeing orchestral concerts on screen is a waste of time should see this DVD. It will change their minds.”   The Daily Telegraph