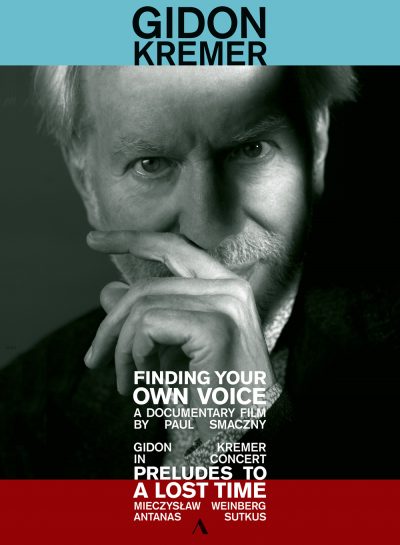 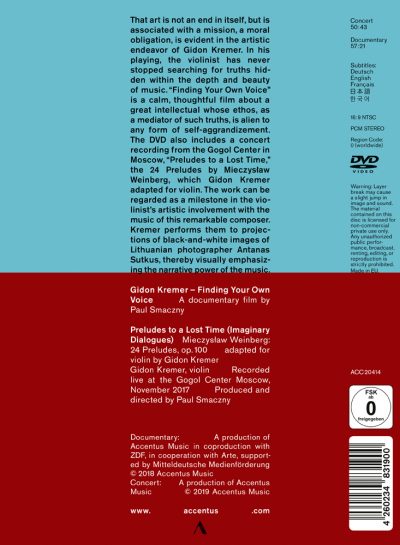 Gidon Kremer
Finding Your Own Voice
A film by Paul Smaczny

Preludes to a Lost Time
Mieczyslaw Weinberg
24 Preludes op. 100 in the adaptation for violin by Gidon Kremer
Recorded at the Gogol Center Moscow

That art is not an end in itself, but is associated with a mission, a moral obligation, is evident in the artistic endeavor of Gidon Kremer. In his playing, the violinist has never stopped searching for truths hidden within the depth and beauty of music. “Gidon Kremer – Finding Your Own Voice” is a calm, thoughtful film about a great intellectual whose ethos, as a mediator of such truths, is alien to any form of self-aggrandizement.

Over the course of one year, Paul Smaczny accompanied Gidon Kremer with the camera, observing him with his Kremerata Baltica in Paris and Riga, as a soloist in Moscow and Tokyo, as well as encountering him as a socially and politically active person. The film also recalls important stages in the artist’s life and tells of influences and partnerships that have shaped him to this day. A calm, thoughtful film that conveys the experience of the highest art of interpretation and deep musical content to the viewer and generates a stirring intensity with poetic images.

The DVD also includes a concert recording from the Gogol Center in Moscow, “Preludes to a Lost Time,” the 24 Preludes op. 100 by Mieczysław Weinberg, which Gidon Kremer adapted for violin. The work can be regarded as a milestone in the violinist’s artistic involvement with the music of this remarkable composer. Kremer performs them to projections of black-and-white images of Lithuanian photographer Antanas Sutkus, thereby visually emphasizing the narrative power of the music.