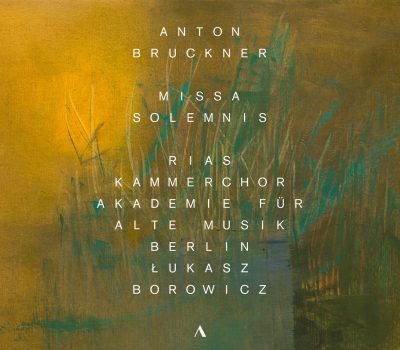 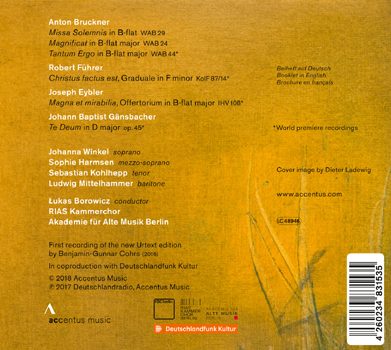 Anyone familiar with Bruckner, his symphonic architectures reaching for the stars as well as his later Missas from the 1860s, may well be amazed at how deep his
Missa Solemnis is still rooted in the solid tradition of Viennese Classicism. In this recording, this rarely heard and recently re-edited and newly published gem is put into the context of the inauguration service of collegiate provost Friedrich Mayr on 14 September 1854 in St. Florian, for which it was written. It is interspersed with the original Proper settings by Robert Führer, Joseph Eybler, and Johann Baptist Gänsbacher.

Recorded at the Konzerthaus Berlin in June 2017.
A co-produktion with Deutschlandfunk Kultur.

An orchestra with a particularly solid base, which nevertheless retains a great lightness. Beautifully defined vocal and instrumental timbres. The sound space is characterized by airiness and homogeneity across the entire spectrum. [A]n exemplary album as much by its musicological approach as by its production.  Diapason D’Or Arte, Diapason Magazine March 2018

[..] the performances could hardly be more persuasive.  Gramophone

The soloists, the orchestra and this extraordinary choir – everything is simply perfect here. The choir sings sonorously, with support, dynamically flexible, exemplary in diction and articulation. And everything is always in motion. The soloists and the orchestra match to the sound of the choir, yet develop individually. The CD is thus an unconditional recommendation for all choir fans. Culture Radio rbb

With a convincingly coherent concept this recording is also musically rewarding. Lukasz Borowicz proves that Brucker’s music can get all the needed sound splendor with a smaller ensemble. The transparency and the nuanced differentiation are the major assets of the performance.   Pizzicato