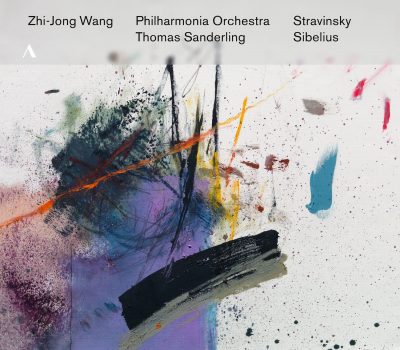 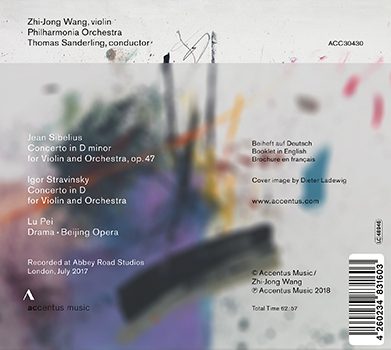 With the violin concertos by Jean Sibelius and Igor Stravinsky, Zhi-Jong Wang and the Philharmonia Orchestra, conducted by Thomas Sanderling, dedicate themselves to two works from the beginning of the 20th century. Although the two works were composed only thirty years apart from each other, they could not be any more contrasting: minor against major, dark, mystical and introverted against exciting, suspenseful and sometimes ironic. And yet, in the contrasts of these two concertos, the virtuoso and inspiring interpretation of the Chinese violinist reveals something amazingly unifying.

Recorded at the Abbey Road Studios in London,
July 2017

[..] a powerful new disc from Accentus [..]. She [Zhi-Jong Wang] creates an ideal mix of shadow and light, hush and fortissimo strength in the Sibelius, with agile and sensitive accompaniment from the Philharmonia. In contrast the sharp angles and clarity of the Stravinsky suit her iron-strong technique and virtuosity equally well, matched by crisp, nimbly rhythmic playing from the orchestra.  The Guardian

Winning performances of both the Violin Concertos by Sibelius and Stravinsky. Wang’s approach of the Sibelius Concerto is deep and communicates in the first two movements the sense of atmosphere and mystery of the work, while the last movement is truly joyous. With much lyricism in the middle movements and sparkling fun in the outer movements, the reading of the Stravinsky Concerto is equally compelling. In both works the Philharmonia and Thomas Sanderling deliver a committed support for the soloist.  Pizzicato