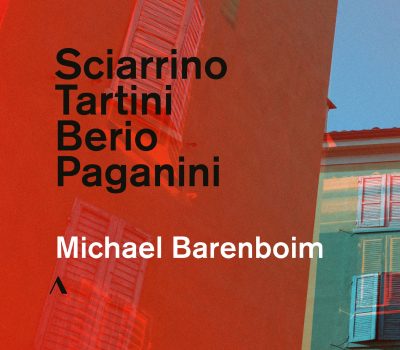 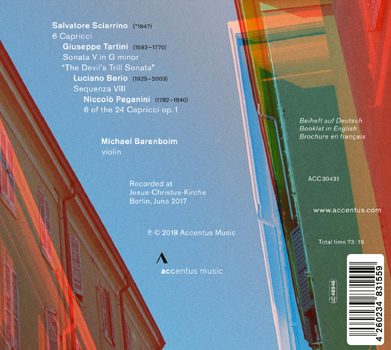 The four works seem very heterogenous at first glance but what unites them is their rich technical and stylistic spectrum. The juxtaposition of traditional and contemporary music works creates an inimitable sound cosmos and makes the works by Tartini and Paganini sound incredibly modern alongside 20thcentury music. Michael Barenboim creatively navigates the sometimes obsessive and diabolical elements of the works and creates an inspired and unique interpretation.

Recorded at the Jesus-Christus-Kirche Berlin
June 2017

Michael Barenboim’s second album focusses on solo violin music from three centuries of Italian art. The extremely demanding program is not a problem for a violinist as outstanding as Michael Barenboim. He succeeds in penetrating the various pieces to perfection.  Pizzicato

A second beautiful disc from Barenboim, played with daring and warmth.  Sunday Times

The fact that technology and sound are of the highest standard, as are the recording quality and the booklet interview, adds to the superb impression.   Crescendo

This recording is breathtakingly compelling, and one that’s full of brilliant revelations, all captured in an appropriately full but focused acoustic.   The Strad

Michael Barenboim wrote about his thoughts on Paganini in The Strad: Learning how to lose control is Paganini’s gift to violin music.

In an interview with Presto Classical he spoke about his new album: Michael Barenboim on Italian music for solo violin