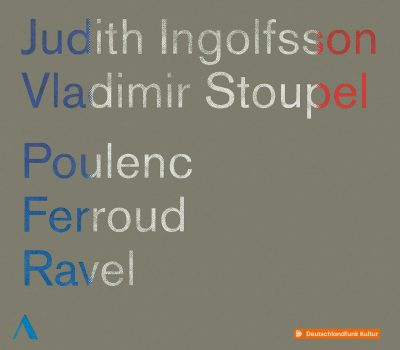 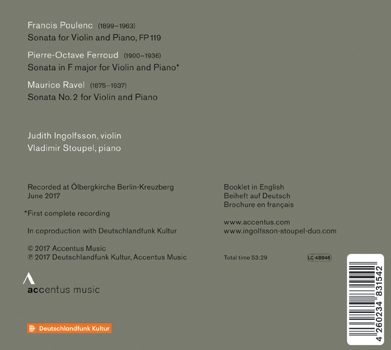 There is one thing that all the three works here have in common: they stand out clearly from an entire French tradition of sonatas for violin and piano. Each, in its way, represents an affirmation of aesthetic independence as well as a fascinating and at times cruel or bitter reflection of its era. The sonatas of Poulenc, Ferroud and Ravel, without foregoing a lofty elegance, are freed from a certain number of rules and forms that had been long imposed.

Judith Ingolfsson and Vladimir Stoupel are both soloists with strong profiles, who search passionately for new paths in the intimate atmosphere of the chamber music recital. After the “Concert-Centenaire” trilogy this is the fourth CD of the renowned duo on the Accentus Music label.

Recorded at the Ölbergkirche Berlin-Kreuzberg, Jun 2017

In co-production with Deutschlandfunk Kultur.

For the interpretation [..] there are only two words: absolutely perfect.  WDR

This attractive program is played with spontaneity and plenty of imagination, so that the music of the three works gets much character and passion.  Pizzicato