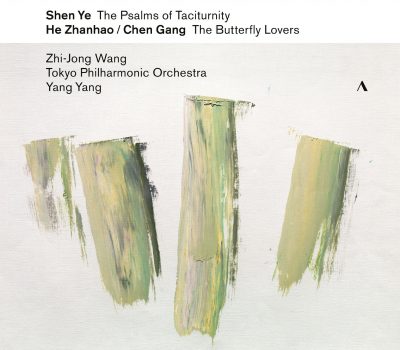 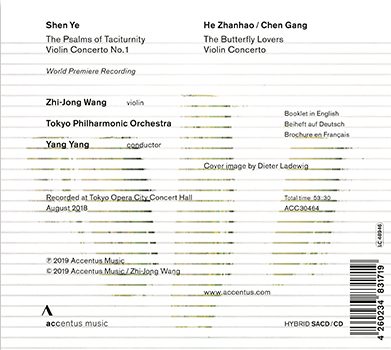 Shen Ye
The Psalms of Taciturnity
Violin Concerto No. 1

Hailed at its premiere as “a breakthrough in China’s symphonic music,” HE Zhanhao and CHEN Gang’s “Butterfly Lovers” Violin Concerto was later reviled during the Cultural Revolution for its Western influence and feudal Chinese inspiration. Though universally recognized among the Chinese people, the piece remains largely unknown in the West. A work of undeniable emotional appeal, it also carries with it a history that some of its biggest supporters are still struggling to digest. Borne of an uneasy union of revolutionary nationalist sentiment and Chinese urban cosmopolitanism, the musical progeny manages to be faithful to both its parents.

SHEN Ye, teaching Composition at the Shanghai Conservatory of Music is one of the most fascinating representatives of contemporary Music in China setting accessible Chinese culture to his own musical language. His works are performed all over in Asia, the U.S. and Europe. all over the world   and this is the world premiere recording of his 1stViolin Concerto „The Psalms of Taciturnity“.

Zhi-Jong Wang – she made her solo debut at the age of 14 with Orchestre national de Lille under Sir Yehudi Menuhin – proves once more an accomplished violinist. With a warm and colourful performance of the well-known violin concerto Butterfly Lovers and a very intense and exciting interpretation of Shen Ye’s fascinating concerto The Psalms of Taciturnity this new release is well worth listening. — pizzicato

In 2011, the Tokyo Philharmonic Orchestra celebrated its 100th anniversary as Japan’s first symphony orchestra. With about 130 musicians, TPO performs both symphonies and operas regularly. TPO is proud to have appointed Maestro Myung-Whun Chung, who has been conducting TPO since 2001, as Honorary Music Director, Maestro Andrea Battistoni as Chief Conductor and Maestro Mikhail Pletnev as Special Guest Conductor. TPO has established its world-class reputation through its subscription concert series, regular opera and ballet assignments at the New National Theatre, and a full, ever in-demand agenda around Japan and the world, including broadcasting with NHK Broadcasting Corporation, various educational programs, and tours abroad. In March, 2014, TPO became a global sensation in its centennial world tour of six major cities: New York, Madrid, Paris, London, Singapore and Bangkok. In December 2015, TPO held Beethoven’s 9th symphony concerts in Seoul and Tokyo with Mastro Myung-Whun Chung, with Seoul Philharmonic Orchestra combined into one orchestra. TPO has partnerships with Bunkamura Orchard Hall, the Bunkyo Ward in Tokyo, Chiba City, Karuizawa Cho in Nagano and Nagaoka City in Niigata.