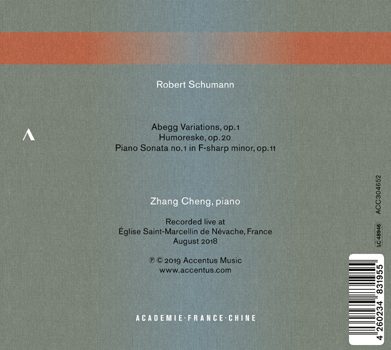 Zhang Cheng was born in China. He began his studies at the Shenzhen Conservatory and from 2007 to 2011 continued at the Texas Christian University School of Music with Tamas Ungar before studying at the University of the Arts in Berlin with Klaus Hellwig. He was advised by Menahem Pressler, Leon Fleisher, Paul Badura-Skoda, Dmitri Bashkirov and Elisso Virsaladze.

Zhang Cheng was awarded the Clara Haskil Prize (and the Audience Prize) in 2011 and the Schumann Prize in 2016, prompting him to study the complete canon of his favorite composer. About his preference for Robert Schumann and his music, Zhang Cheng says: “There was no specific moment where I decided that I should study Schumann’s complete oeuvre. The reason that keeps me exploring his music is his humanity. In my opinion, Schumann is an extraordinarily free and generous personality. Most importantly, he allows himself not to be perfect and first and foremost to be who he is. Schumann was also an endless resource of inspiration for me in my search for my own identity.”