buy the CD buy the Vinyl 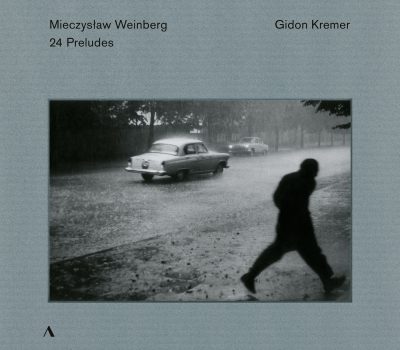 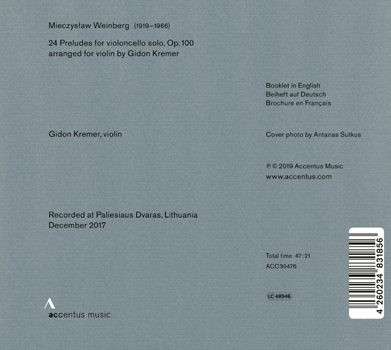 The 24 Preludes for Cello solo by Mieczysław Weinberg have a particular history. He composed them in the late sixties for Mstislav Rostropovich, who never played them. Their musical language is aphoristic, often brutal, provocative and marked by an inner conflict. The Preludes reveal many different and very strong gestures. Their performance may have been problematic in Soviet times.

Gidon Kremer has adapted the preludes for solo violin and this is the world premiere recording of his adaptation. In his concert program “Preludes to a Lost Time”, he plays them to projections of pictures by the famous Lithuanian photographer Antanas Sutkus. One of these pictures is shown on the cover of the CD. Gidon Kremer’s earlier approaches to the music of the long neglected, brilliant composer Weinberg, in whom many see a legitimate musical heir to Dmitri Shostakovich from today’s perspective, were praised by music critics all over the world. Kremer, with his very own tone, seems to be the ideal interpreter for this exciting repertoire.

Mieczysław Weinberg composed his 24 Preludes for the violoncello. Gidon Kremer transcribed them for the violin. His playing outstandingly shows the depth of feelings and the technical richness of these pieces together with his genuine admiration for this composer. — pizzicato, Supersonic pizzicato

…fit for LP in terms both of length and the warmth and elbow-room afforded to Kremer’s palette of vibrato by a forwardly balanced analogue transfer. — vinyl review in Gramophone Magazine (October 2020, Awards Issue)