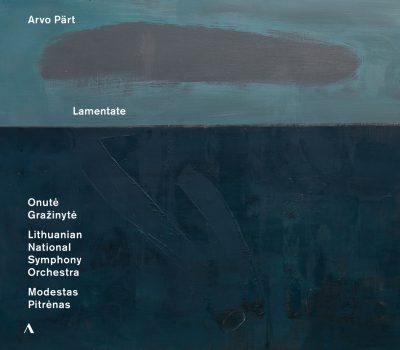 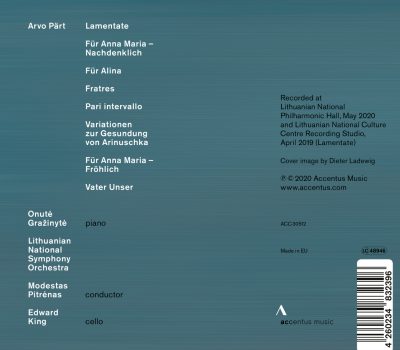 Arvo Pärt’s compositions were and are often inspired by external circumstances. Evidence of this can be seen in the selection of works for and with piano, which Onutė Gražinytė chose for her debut recording. The “Lamentate” was inspired by Anish Kapoor’s sculpture “Marsyas”; in 1977 he dedicated the Variations for the healing of Arinushka” to his daughter; “Pari intervallo” was inspired by the ensemble “Hortus Musicus”, and the list goes on… “Für Alina” is of particular importance to the Lithuanian pianist as she knows the mother of the piece’s dedicatee. Onutė Gražinytė was astounded by the simple notation. “First you ask yourself: What is this?” Her playing reveals that she has understood. “Arvo Pärt has reached the core. It’s no coincidence that he dedicated many piano pieces to children and let a boy sing the “Our Father”. It’s the pure ideal that children are born with, and to which the composer has returned.”

Gramophone Magazine, 12/2020
“This is a wondrously thought-provoking anthology of Pärt’s work. […] This performance of Fratres, with cellist Edward King, is one of the best I have ever heard […] You cannot buy that kind of innocent beauty but you can, and should, buy this disc.”

Supersonic pizzicato (30 September 2020):
« Silence is always more perfect than music. You have to learn to listen to it, » says Arvo Pärt. The Estonian musician composes silence with few means. It is minimal music in that sense. But when it comes to expression and effect, it is Maximal Music, if not the essence of music.
The young Lithuanian pianist Onute Grazinyte has therefore not exactly chosen the simplest repertoire for her debut album. Her courage and her ambitions are rewarded. The longer you listen to the pianist, the more you feel how well and safely she moves in Pärt’s musical universe.
Onute Grazinyte by no means turns the music into a superficial oasis of well-being, it is not Pärt’s music that you might be sprinkled with as a sensual background music in saunas and similar wellness facilities. The pianist absorbs Pärt’s music and reproduces it unfiltered, authentic and unaffected.
One of the most difficult elements in the music are the pauses and – even more so – the silence. These moments can only be properly prepared, balanced and shaped if one is equipped with a musical sensitivity like the one of Onute Grazinyte. Indeed, Pärt’s intimate, almost shy sounds – the mirror of his reserved nature – are so pure and fragile that they can be damaged without such a sensitivity.
Onute Grazinyte and the Lithuanian National Symphony Orchestra under Modestas Pitrenas play Pärt’s music – especially the main work Lamentate – very expressively and communicatively. It is a pure distillate of music that echoes and has an effect long after the last sounds have been heard.