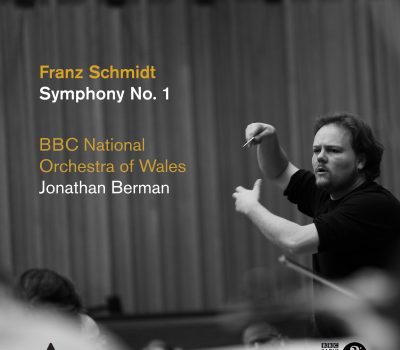 “In conversations about Franz Schmidt the recurring theme emerging for many is that listening to a performance of his music at a young age became the turning point in their lives – the realisation of how powerful music can be,” recalls conductor Jonathan Berman who also found his love for the music of Franz Schmidt while researching the composer for prior to a performance of his Fourth Symphony.

Over the years, Berman has become an avid promoter of Schmidt’s works, which prompted him to start recording all four symphonies with the BBC National Orchestra of Wales as well as present the composer’s oeuvre in an array of televised concerts and radio documentaries, a festival focusing on Schmidt’s chamber music, and so much more – all leading up to the composer’s 150th birthday in 2024. Until the pandemic hit in 2020 just shortly after the First Symphony had been recorded in January of that year…

The recordings of the other three symphonies are scheduled to recommence in November 2021 and all four symphonies will be released in a box set on Accentus Music in time for the composer’s jubilee. As a taster of what’s to come and to tide the audience over until the recordings are completed, the four symphonies will be released digitally as a lead-in to the joint physical box set, starting with this recording of the First Symphony. While it is still an early work in Schmidt’s oeuvre and audibly inspired by the composers who came before him, the symphony’s musical grace and refinement already allude to the composer’s later works, which shines trough in Berman’s inspiring interpretation with the BBC National Orchestra of Wales.

Produced in association with BBC Radio 3 and BBC National Orchestra of Wales.
The copyright in the recording is jointly owned by the BBC and Accentus Music.