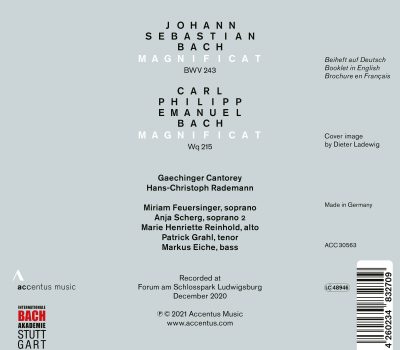 Carl Philipp Emanuel Bach thought highly of the art of his father, Johann Sebastian. However, this did not prevent him from pursuing his own path. Even when Carl Philipp Emanuel made himself a candidate for the position of Thomaskantor as Johann Sebastian’s successor, he did not reverently demonstrate his artistic ties to his father. Instead, he accentuated his compositional independence in one of his first choral works and confidently presented himself with a Magnificat. In Leipzig, this would inevitably subject him to direct comparison with his father, who, at the age of 38, as the newly appointed Thomaskantor, had also presented a Magnificat as his first major work on July 2, 1723. To this day, Carl Philipp Emanuel’s Magnificat is measured against that of his father. In December 2020, the Gaechinger Cantorey chorus and orchestra under the musical direction of Hans-Christoph Rademann and together with an excellent ensemble of soloists performed both magnificent works together in concert – unfortunately in front of an empty hall but reaching their audience via livestream and recording it for this extraordinary CD release.