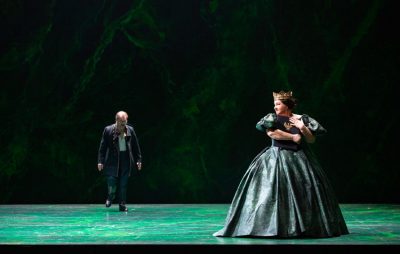 This production will first be broadcasted on arte on November 10, 2019.

„Va pensiero sull’ali dorate“ – the famous prisoners’ chorus from Nabucco is considered the centrepiece of the entire opera. And precisely these words are supposed to have fired Giuseppe Verdi’s imagination when his gaze happened to fall on this passage in the libretto, which he was about to put aside without setting it to music. With his third opera – written at a dark time that was overshadowed by a series of deaths – the composer saved himself, as it were. In this work, he found his way to his own dramatic and musical idiom that is characterised by both expansive lines and explosive rhythms. Verdi later wrote that his artistic career had only truly begun with the composition of Nabucco.

An important protagonist in this work is the chorus in the role of the Israelites held captive by the Babylonians. Against this political background, the love story unfolds between Fenena and Ismaele as well as the intrigues of the jealous, power-hungry Abigaille. Ultimately, the Babylonian King Nabucco overcomes his megalomania and releases the prisoners – a theme that struck a chord in 1842, the year when the opera was premiered: Italian audiences identified themselves with the Israelites, since they suffered under the foreign rule of the Habsburgs and Bourbons. Verdi thus became one of the most popular icons of the «Risorgimento»; his name was equated with throwing off foreign domination and achieving political self-determination. Under the direction of Andreas Homoki, this new production will feature a first-class cast: Catherine Naglestad and Michael Volle will debut in the roles of Abigaille and Nabucco respectively, while the German bass Georg Zeppenfeld will portray Zaccaria. Music Director Fabio Luisi will conduct the Philharmonia Zürich.