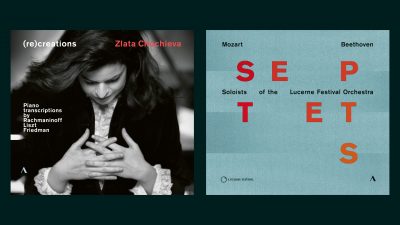 On 12 February, 2021, Accentus Music releases two new albums with piano transcriptions interpreted by acclaimed pianist Zlata Chochieva and the live recording of Mozart and Beethoven Septets with the Soloists of the Lucerne Festival Orchestra:

Transcribing musical works for other instruments or instrumentations has a long tradition in music history. Sometimes, the composers themselves wrote different versions of their works and often it is the musicians who adapt works for their own instruments. Even great composers have enjoyed arranging the works of their predecessors and have thus transported them into their time and era of music history and lent their own interpretations to them.

Among those are Sergei Rachmaninoff, Franz Liszt, and Ignaz Friedman – all three great pianists and composers. Renowned Russian pianist Zlata Chochieva presents their transcriptions of the works of great composers such as Bach, Mendelssohn and Mahler on her new album “(re)creations”.

Beethoven’s radiant and entertaining septet combines logic with catchiness and offers a spiritual musical conversation. And it is in this discipline that the soloists of the Lucerne Festival Orchestra, who are dedicated to making music in friendship, are masters.

How did Ludwig van Beethoven become a great symphonist? A milestone on his way there is marked by the Septet, which he composed in 1799, on the threshold of a new century, for this large-scale chamber work, with its mixed instrumentation of winds and strings, already assembles an orchestra “en miniature”. At the same time, however, Beethoven thus founded a new genre of ensemble music, which was to be followed by numerous composers from Franz Schubert to Johannes Brahms and Jean Françaix with nonets, octets, sextets or quintets.

They also prove this in the Nannerl Septet, which Wolfgang Amadeus Mozart probably created in 1776 for the name day of his sister Maria Anna: artfully playful music of the best festive and champagne mood.