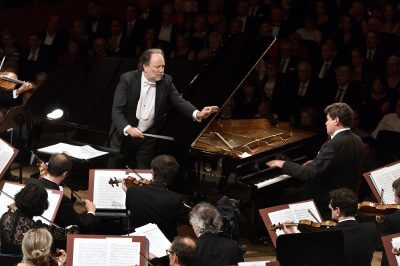 Everything changed for Sergei Rachmaninoff after 1917. As a result of the October Revolution, power impinged directly on his life – and on his art. The new political conditions forced him to leave his Russian homeland and flee into exile in the West. In order to earn a living, he had to perform for the most part as a piano virtuoso, constantly touring Europe and America. Which meant he had hardly any time left over to compose.

The program with which Riccardo Chailly and his LUCERNE FESTIVAL ORCHESTRA opened the 2019 Summer Festival orbits around this turning point in Rachmaninoff’s life, pairing the legendary Third Piano Concerto, written in Russia in 1909, with the melancholic Third Symphony, which he created as an émigré in Hertenstein near Lucerne in 1935-36. In both works, Rachmaninoff inspires listeners with his gift for melody, but, as Riccardo Chailly also remarks: “In fact his real hallmark is his harmonic thinking. You need only hear three chords and at once you can recognize his creative genius.”