The unique recording of Chopin’s Piano Concertos featuring Evgeny Kissin and Nikolai Demidenko marked Frédéric Chopin’s 200th anniversary. The Russian star pianists were accompanied by the Warsaw Philharmonic Orchestra under the baton of Antoni Wit. The internationally celebrated concert event recorded live at the National Philharmonic Hall, Warsaw, presents Nikolai Demidenko with a marvelous performance of Chopin’s Concerto No. 1 and Evgeny Kissin with a most thrilling interpretation of Concerto No. 2. The former wunderkind enthused the audience, which could not get enough even after three encores – A unique performance and truly a gift for Chopin lovers all over the world.

“The consistency with which Demidenko had conceived his interpretation was admirable. There was not a single remark in the score that was omitted or left without interpretation.“

“Evgeny Kissin ravished the audience with his great poetic vision, the powerful creation that made an unforgettable impression. It was a giant fresco, where detail does not matter so much, as the big picture is of prominent importance.“ 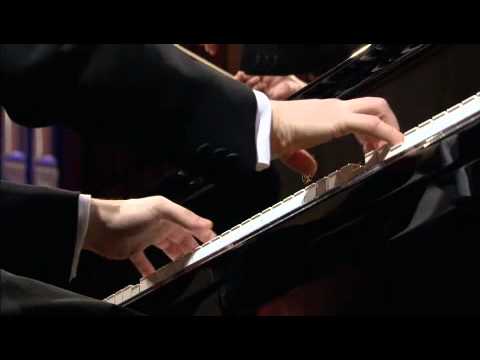