Lucerne Festival 2012 was dedicated to the relationship of music and hope. In the opening concert, Claudio Abbado and the Lucerne Festival Orchera presented Mozart’s Requiem as well as the Beethoven’s Incidental Music to Goethe’s tragedy Egmont. With Juliane Banse, Anna Prohaska, Sara Mingardo, Maximilian Schmitt and René Pape as soloists and Bruno Ganz as narrator, this concert was once again a special musical experience of highest artistic quality.

Matching the 2012 motto of Lucerne Festival in summer, Claudio Abbado and the Lucerne Festival Orchestra  presented a work inspired by the strongest kind of faith in the opening concert: radical to the point of self-sacrifice, it expresses a political utopia and a religious vision. Goethe’s hero Egmont is prepared to sacrifice his life in order to liberate the Flemish people from subjugation by the Spanish. “I die for freedom, for whose cause I have lived and fought, and for which I now offer myself in sorrow as a sacrifice,” he exclaims as the executioners approach. He goes on to rally his comrades-in-arms: “And to save those you love most, be ready to fall joyfully and follow the example I give.” Egmont’s faith is in a future he himself will not live to see. He devotes himself to something that cannot be seen—and that links his own credo to the Christian worldview, to faith in a life after death. Mozart’s Requiem, a work shrouded in mystery that will be heard in the second part of the evening, not only signifies a memorial to the fallen hero but carries a message of eternal light and redemption—of the better life for which we hope, no matter what our faith. 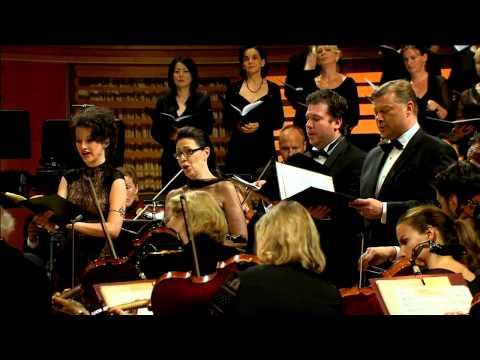