The New York Philharmonic, led by Music Director Alan Gilbert, presented “A Concert for New York” in remembrance and renewal the tenth anniversary of 9/11. Programming Mahler’s 2nd the orchestra sought to set a sign of hope, since this work is often referred to as the “Resurrection” Symphony. Featuring soprano Dorothea Röschmann, mezzo-soprano Michelle DeYoung and the New York Choral Artists the free concert on September 10, 2011 in Avery Fisher Hall was projected live onto a large screen in the Josie Robertson Plaza at Lincoln Center.

“We want to create a concert recording which fully respects the integrity of Mahler’s 2nd Symphony and at the same time allows to reflect the memories and emotions of the American people regarding this tragic moment in American history”, said ACCENTUS’ executive producer Paul Smaczny. 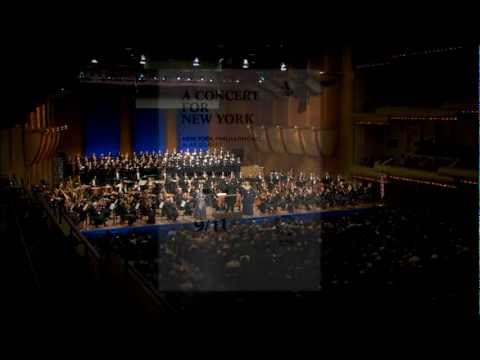