Always armed with a bowler, wisecracks and affectations, he is not only on the outside one of the strangest fellows in French music history: Erik Satie was not just a composer, he was also a designer, church founder, PR pioneer, master of aperçus, author, wayfarer, professional self-publicist and inventor of “Musique d’ameublement.”

The music documentary “Satiesfictions” details the overall phenomenon of Satie in playful episodes with a wink and a smirk – and also takes him quite literally: His countless ads conceived in private evolve into real commercials and his drawings of jetliners and swaying hotels take on a life of their own as cartoons.

Music à la Satie turns performers into “musical furniture” in swimming pools, factories or at rail stations, allows aging divas to forget their performances and even four-legged animals including their bones into the limelight with pieces written for dogs. Pianists tickle the ivories on pianos stacked atop each other or are adorned with snowflakes. Natural landscapes, scenes from everyday life and impressions of the city pair up with Satie’s cosmos of word and sound.

The world as Erik Satie saw it is interwoven with eyewitness accounts and interviews with Satie experts. They go back and forth between outlining this artist’s colorful personality and drawing their own picture of certainly the most unusual protagonist of the early 20th century French avant-garde. 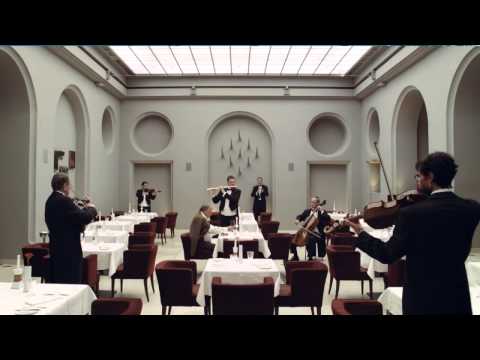