The soloists of The Philharmonics – an ensemble made up of musicians from the Vienna Philharmonic – performed Johann Strauß’s waltzes arranged by Arnold Schönberg, Anton Webern und Alban Berg in an original Viennese Coffeehouse.

In 1921 Alban Berg, Anton Webern and Arnold Schoenberg set out to rescue their Society for Private Musical Performances from financial ruin by making arrangements of some of Johann Strauß’s most popular waltzes. Their aim was to organize “model performances” for their members: elsewhere, they argued, the “constraints of everyday musical life” meant that performances could not be properly rehearsed. But they were unable to find enough paying members to cover their costs. As a result, they were reduced to giving endless concerts simply as fundraisers. The four Strauß waltzes were first performed on 27 May 1921, with the composers themselves as executants: Berg on the harmonium, Schoenberg on the first violin and Webern on the cello.

This exceptional repertoire from 1921 was produced in coproduction with ZDF/arte and Servus TV with kind support by Casinos Austria AG – Österreichische Lotterien Ges.m.b.H. and ARAG Österreich AllgemeineRechtsschutzversicherungs-AG. 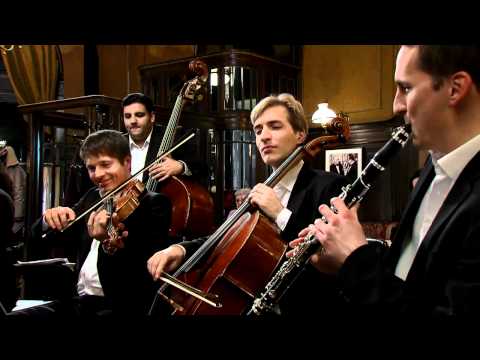