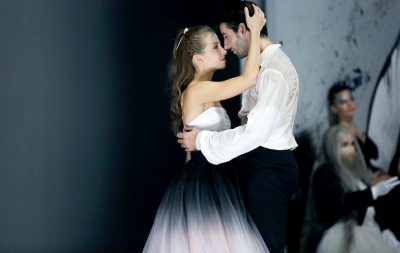 Ballet by Christian Spuck
Music by Pyotr I. Tschaikovsky

Six fairies are invited to the christening of Princess Aurora, who endow their godchild with all conceivable positive attributes. Only the evil fairy Carabosse has not received an invitation and takes revenge with a curse: Aurora shall prick herself on a spindle and die. The good lilac fairy cannot reverse the curse, but she can at least weaken it. When Aurora pricks herself on her sixteenth birthday, she and all the castle’s inhabitants fall into a hundred-year sleep, from which only a prince can awaken her.

In 1890, Sleeping Beauty, choreographed by Marius Petipa, was premiered in St. Petersburg with Pyotr Tchaikovsky’s immortal music. In his version for Ballett Zürich, Christian Spuck revives the ballet classic in his own personal artistic style. He takes the old Sleeping Beauty story and scrutinizes every aspect of it. In doing so, the fairy Carabosse becomes the story’s focal point as a hurt, empathetic and passionate figure. She succeeds in transcending herself and her feelings of revenge. Princess Aurora matures into a self-confident young woman.

With a great deal of humor, Christian Spuck addresses the complex process of growing up, relating themes such as generational conflicts with one’s parents, the difficulties of becoming a mature adult, and, last but not least, love and sexuality. Whenever possible, he frees the characters from their traditional role clichés. Petipa’s version becomes a model that Christian Spuck occasionally cites yet repeatedly questions and counteracts with irony and occasionally irritating moments. Robertas Šervenikas is the conductor of the Philharmonia Zurich.