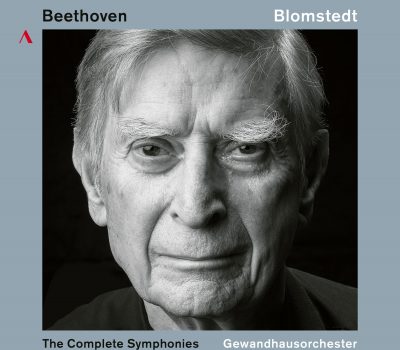 In celebration of Herbert Blomstedt’s 90th Birthday in July 2017, Accentus Music releases a new Beethoven cycle that captures the spirit of the long-standing partnership between the legendary conductor laureate and the Gewandhausorchester Leipzig. All nine symphonies, released in a box set containing five CDs, are live recordings made at the Leipzig Gewandhaus between May 2014 and March 2017.

Blomstedt’s interpretations of Beethoven are based on a highly responsible handling of the scores and this conductor’s deep love of the truth, in which everything that is superimposed and overtly effective is fundamentally removed. At the same time however, the performances embrace the ethical conscience of the artist with his deep, almost seismographic musical sensibility and a high expressivity.

“Rarely have Beethoven’s symphonies sounded so stringent, so powerfully fluid, and so filled with tension. […] An exemplary cycle of recordings.”  Attila Csampai, Crescendo

“A performance marked by innovative depth becomes a festival for the ears.”  Neue Musikzeitung

“Blomstedt and the Gewandhausorchester Leipzig play Beethoven with a tonal beauty and with a resoluteness that makes these incomparable recordings unassailable as a refernece standard.”  HR2 Kultur

“Herbert Blomstedt’s Beethoven testament is overall coherent, natural and immensely rhetoric. The music flows continuously with a vivid pulsation and is always admirably transparent. The rapid movements are fresh, with splendid rhythmic bounce, while the slow movements have warmth and are strikingly beautiful. The orchestral playing is of high quality, and the recorded sound is very good.”  Pizzicato

Also available on DVD/Blu-ray as well as Video on Demand: